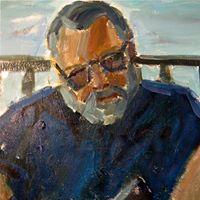 When I start conversations with most people I tell them I have aphasia. I say to them, “This causes me to talk slowly.” I don’t say “hesitantly.” If the truth were to be known, I have trouble saying “hesitantly.”

Most people readily accept my explanation. They always something say something like this, “It’s better than talking so fast I can’t hear you.”.

Actually, I have primary progressive aphasia, “P.P.A.” The key word is “progressive.” It’s a rare brain disease. There’s no cure for it. It’s often disguised and mis-diagnosed.

“Early symptoms are usually very subtle, and patients may be the only ones aware of the problem because they have to work harder to communicate, even though they may not make obvious errors,” said Joseph R. Duffy, head of speech pathology at the Mayo Clinic in Rochester, Minn. “Initially, their communicative errors are like those we all make and may be written off as due to chronic fatigue.But gradually the errors of speech occur with increasing frequency.”

My aphasia was a shock to me. I’m still getting used to it. I used to be a well-known speaker on the Constitutional separation of church and state. I’ve spoken at many colleges and over 500 radio talk shows.

I’m awkward in social situations. Sometimes I say inappropriate things that embarrass me. One time my wife and I were at a party. We were introduced to another couple and the first word out of my mouth was “Good-bye.” Or, often, I don’t make sense.

I even have trouble talking to my wife. Sometimes I use a word that’s easier to pronounce than the precise word. I use simple words.

I have dreams at night where I can speak well. I wake up and I look forward to speaking normally, but I can’t and don’t.

I have a great fear of speaking to anyone. If a neighbor greets me in the morning, or when I’m going to the store, I’m terrified of speaking. At the hardware store I often don’t make sense. I have a fear of talking on the telephone. It petrifies me. I’m afraid I’m going to say the wrong thing, or not say anything at all.

Sometimes I tell people right off the bat that I have aphasia, especially to people I don’t know. Some people think I had a stroke. I wish I had a stroke.

I don’t like having aphasia. But I have to live with it. At least I try to make a joke of it.

One of the ways I joke around about aphasia, I say to someone, “I’m picked for a movie role,” pausing, “I say silent pictures.”

I carry a card in my wallet put out the National Aphasia Association, it says,

It goes on further to say,

I have aphasia, (u fay’zhuh) a communication impairment.

My intelligence is intact.

I am not drunk (not yet — I added this!), or mentally unstable.”

Inside the multi-part card, it says, “How You Can Help. Give me time to communicate. Speak to simply and directly to me. Do not shout. Ask yes/no questions.”

And further it says, “Speaking takes a little more time.” In fact, at takes a lot more time.

A friend asked if I could sing? It doesn’t help.

I find that I talk very loudly, especially on the telephone, almost shouting.  I have to stop it.

I have determined to beat aphasia. At least I’ll damn try.

Winter Emergency Preparedness and Aphasia
Going Forward or Backward With Aphasia
Two Strokes at Once
Aphasia support communities are also for caregivers!
Two strokes at once & a Widow Maker