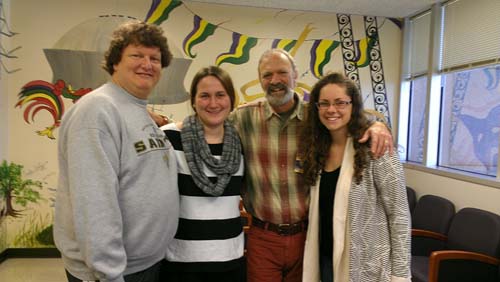 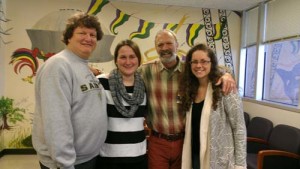 David Adams with his family.

My name is David Adams, a native of New Orleans, LA. I am a husband to a loving and supportive wife and the father of two beautiful intelligent daughters. In 2005 at the age of 43, I was watching TV and all of a sudden I became confused and fell to the floor. My wife called 911, and I was rushed to the hospital.

Upon arriving to the Emergency Room, my wife was faced with a difficult decision. Due to the timing of the onset of my stroke and the small window of opportunity to receive a clot buster shot, the doctors referred to my wife for consent whether or not to proceed with the shot. The choice was difficult because the window for the clot buster shot was closing, and the doctors did not have time to determine what kind of stroke I was suffering from.

Later I was diagnosed with Broca’s Aphasia with Apraxia of Speech. Rehabilitation required many years of hard work and dedication. There were times when I wanted to give up, but my family and therapists provided me the support I needed to continue with recovery. Currently I still receive speech therapy services to work on my communication effectiveness, memory, and speech. I continue to make gains in my progress. It has been a long road and I still have difficulties, but my life has been rewarding.

Affiliate Highlight: Buzzards Bay Speech Therapy
Learning to speak - relating sounds to meaning
How to Set Up a Charity Walk (Part Two)
Words are more like Cats than Dogs: A Commentary on Aphasia
How to Turn e-Books into Audio Books