About the 2016 National Aphasia Awareness Survey

This “National Aphasia Awareness Survey” is the first major survey to determine the level of familiarity and understanding of aphasia in the United States. People with aphasia and their caregivers consistently report to the NAA that they confront not only a lack of awareness of aphasia, but also a lack of understanding of the condition. This anecdotal evidence was confirmed with a survey of 1142 respondents with a strikingly low aphasia awareness number: only 8.8% of respondents had heard of the term aphasia and correctly identified it as a language disorder. These are the respondents that we have identified as “aphasia aware”. 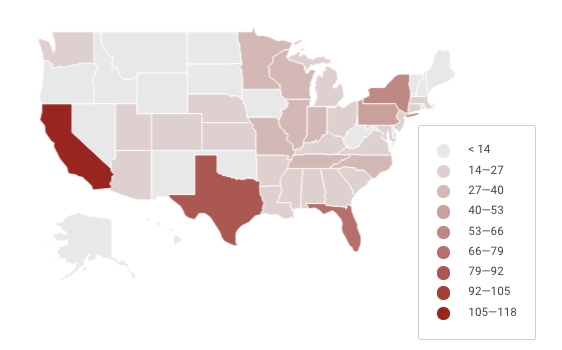 84.5% of people have never heard the term “Aphasia” 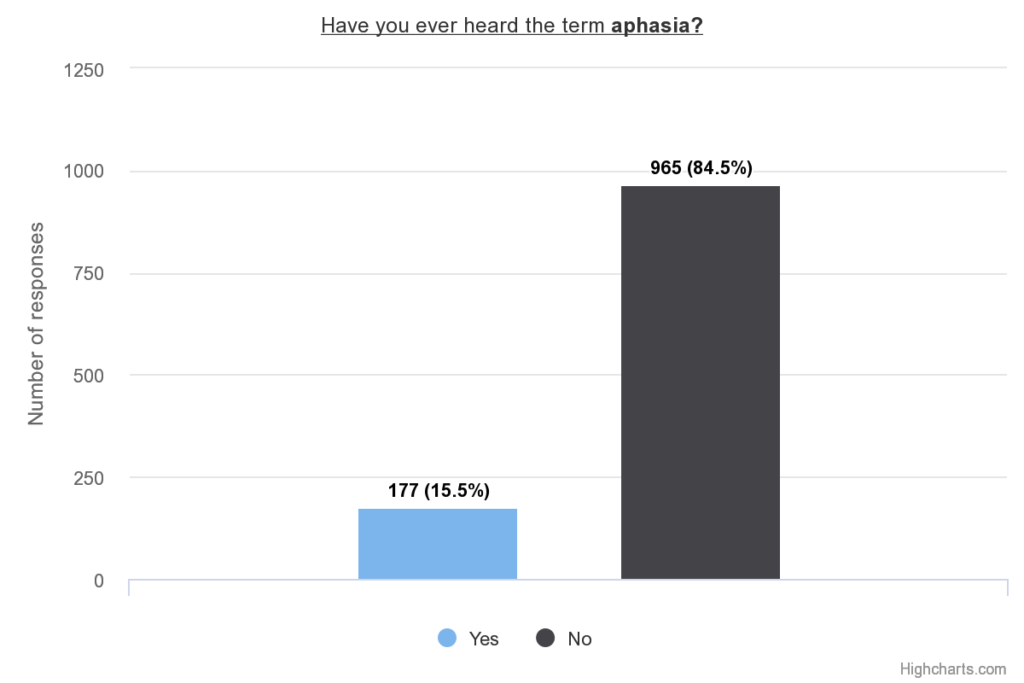 8.8% of people have heard of aphasia and can identify it as a language disorder.

The 15.5% of respondents who had indicated that they had heard the term aphasia were then directed to answer another question to qualify their response. We didn’t just want to measure familiarity with the term aphasia, but awareness of the condition. The following question asked respondents to pick a choice that best describes aphasia. 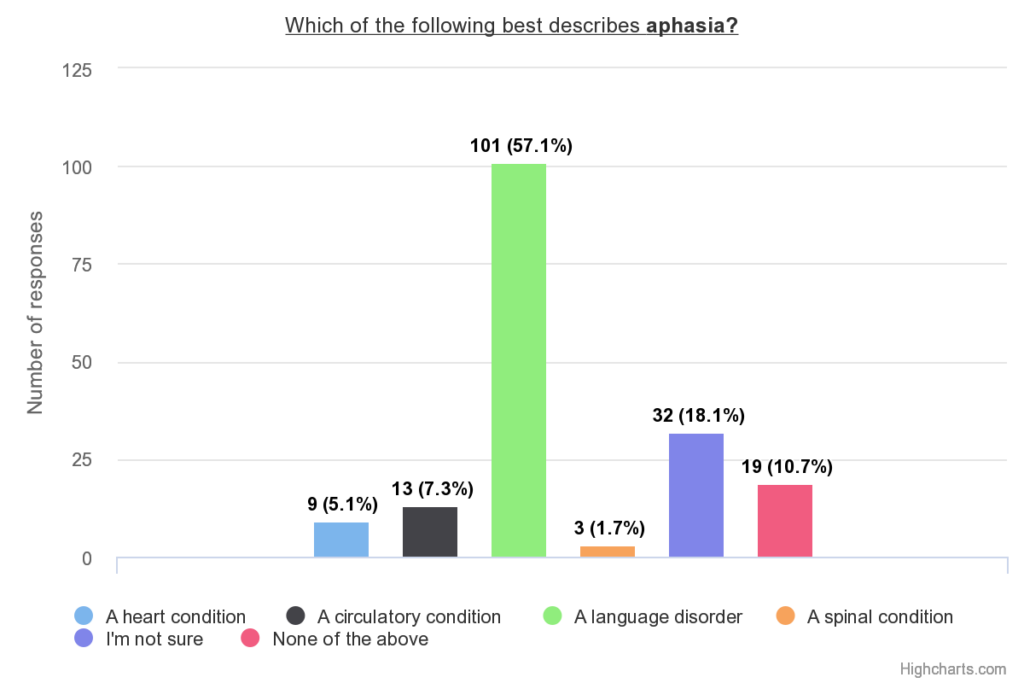 The portion of the 15.5% of respondents who further correctly selected aphasia as a language disorder are those that we are considering “aphasia aware”.  101 respondents, or 8.8% of the total 1142 respondents, made the correct selection.

2.2% of respondents familiar with aphasia self identified with having been diagnosed with aphasia. 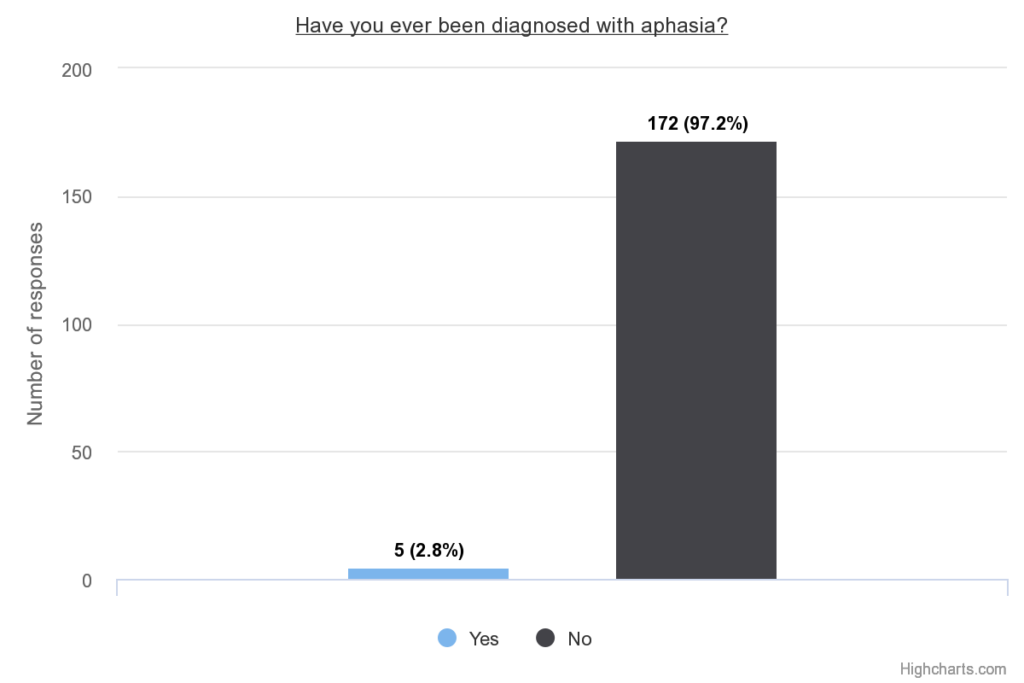 The graph above is slightly misleading, because one of our respondents identified as having aphasia, but incorrectly identified it as a heart condition. Removing that response, we see that 2.2% of our respondents that were familiar with the term “aphasia” reliably self identified with having been diagnosed with aphasia.

34.7% of people that are “aphasia aware” either have aphasia or know someone that does. 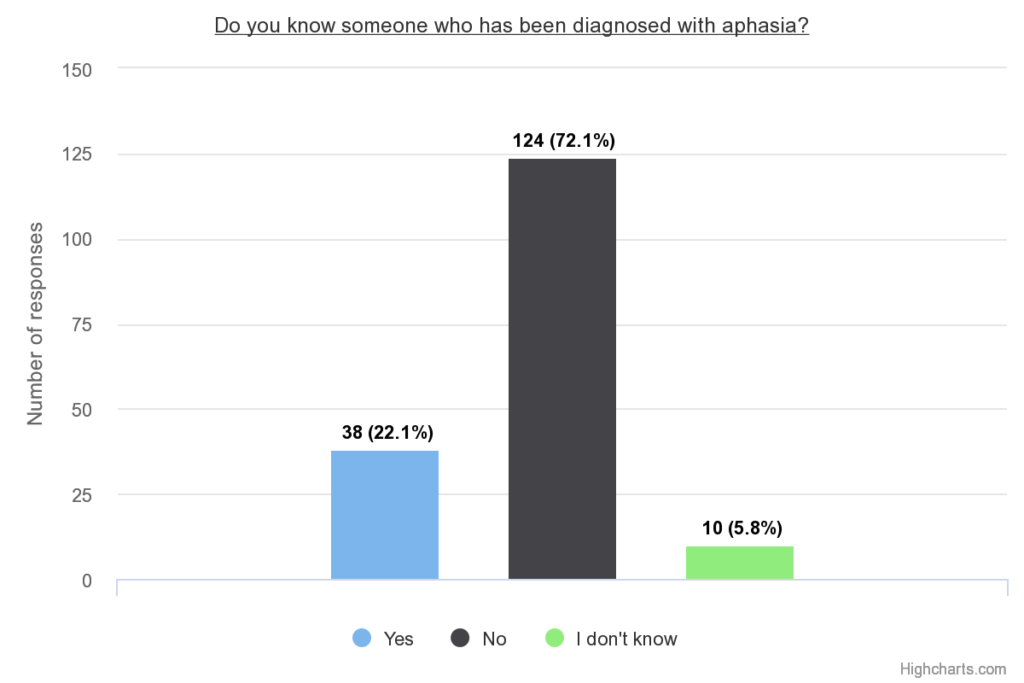 The 38 people who replied yes to this question, together with the 5 who identified as having aphasia, resulted in 43 of our respondents who were familiar with the term aphasia due to a personal experience of it. After cross tabulating the data to eliminate people who did not correctly identify aphasia as a language disorder, that number was reduced to 31 for this question and 4 for those who said they were personally diagnosed with aphasia. 35 people is a 34.7% of the 101 “aphasia aware” respondents had aphasia or knew someone who did. Clearly, a very large number of people who are aphasia aware are hearing about it from direct personal experience.

31% of people agree or give a neutral response to the idea that difficulties with speech indicates intellectual deficiencies. 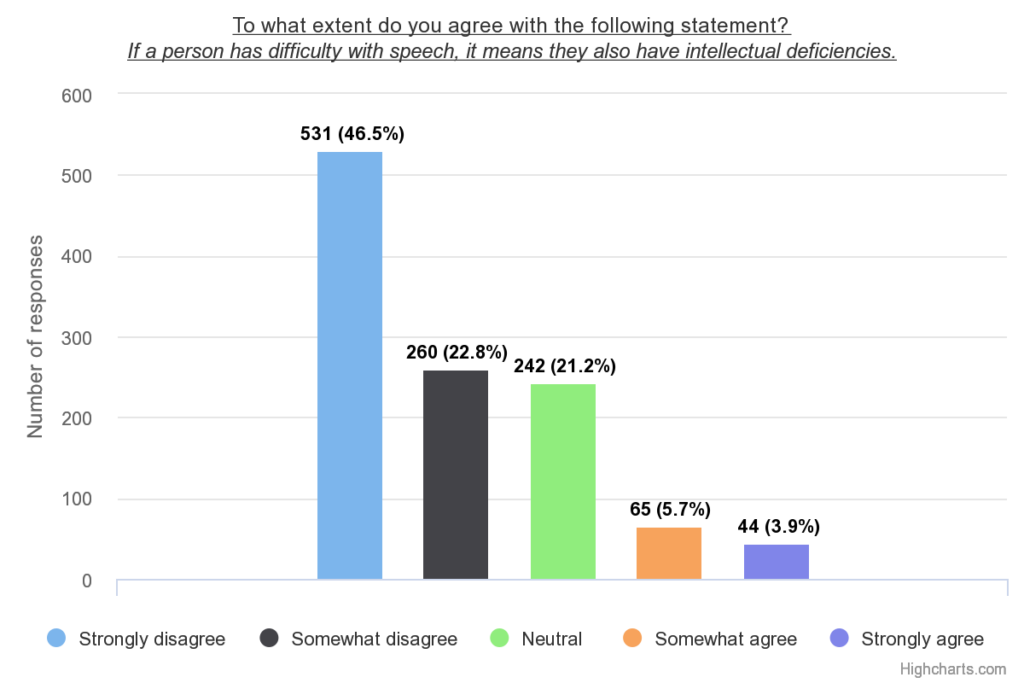 31% of respondents agreed or gave a neutral response to the statement: “If a person has difficulties with speech, they also have intellectual deficiencies”. A significant number of people strongly correlate intellectual capacity with speech ability.

The prevalence of this idea can make interactions between people who have aphasia and those who are not aphasia aware particularly challenging.

84.1% of people made a connection between stroke and brain injury and difficulties with communication. 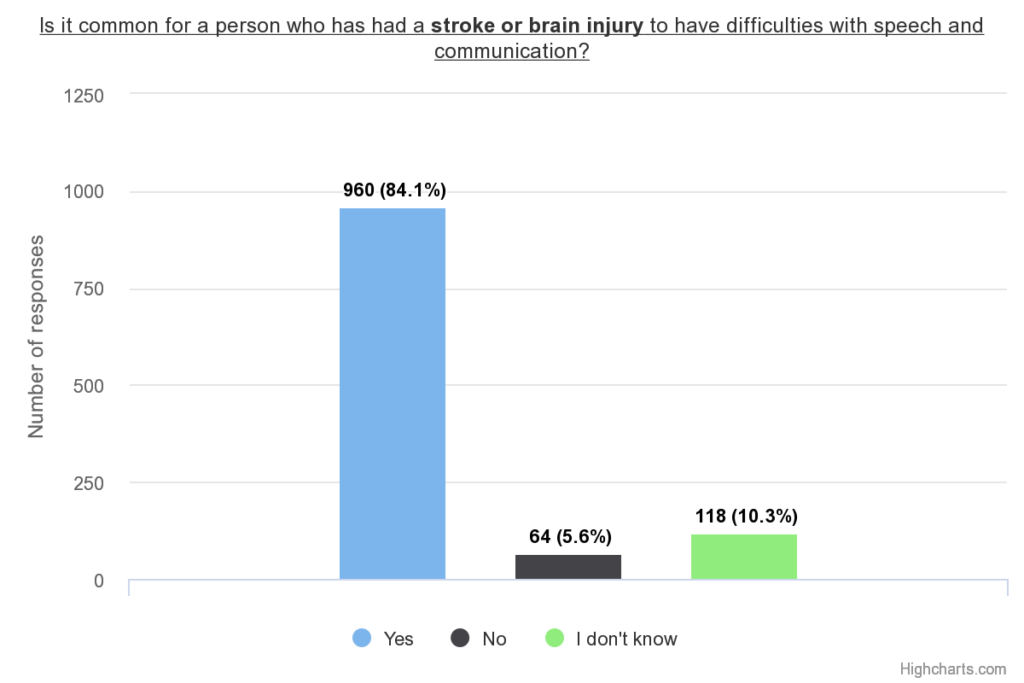 84.1% of respondents made a connection between stroke and brain injury, and difficulties with communication. But, as we saw in earlier questions, the overwhelming majority of respondents (91.2%) does not properly connect problems with speech to the term “aphasia”.  This can be interpreted as an indication that there is awareness of speech issues that are connected with brain injury and stroke, even though the respondent is not capable of defining it as aphasia.

15.3% of people recall first hearing about aphasia from newspapers, magazines or online publications. 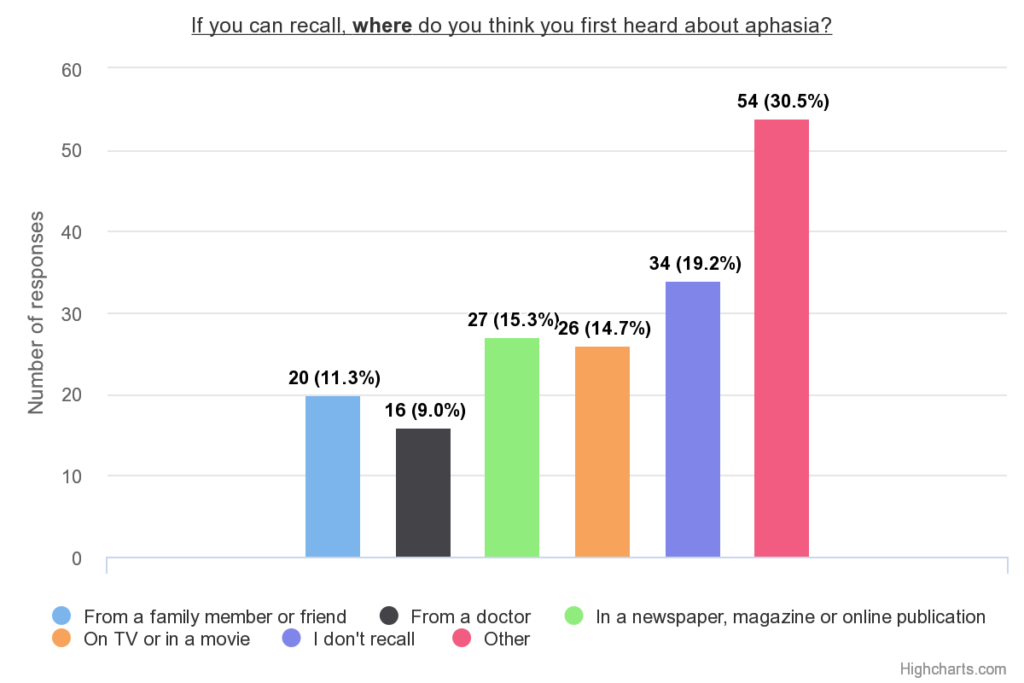 Newspapers, magazines or online publications were listed as one of the most common ways that people remembered first hearing about aphasia. Outreach to traditional media outlets as well as digital media with accurate information are very important for raising aphasia awareness. This was closely followed by television or movies. 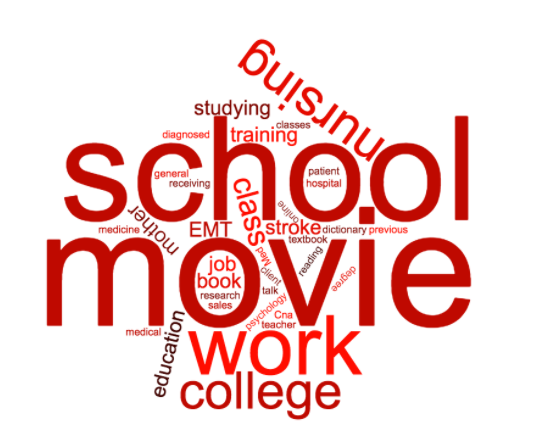 From the qualitative answers, we realize that portrayals of aphasia in popular culture are a significant source of awareness about aphasia. Several of the qualitative responses included Dr. Oz, House, M.D., and The Exorcist (television show).  While we have not reviewed these specific references for accuracy of their portrayals, it’s interesting to see some wide ranging examples for how information about aphasia is spread. Family, friends, and doctors are also a significant source of information about aphasia. 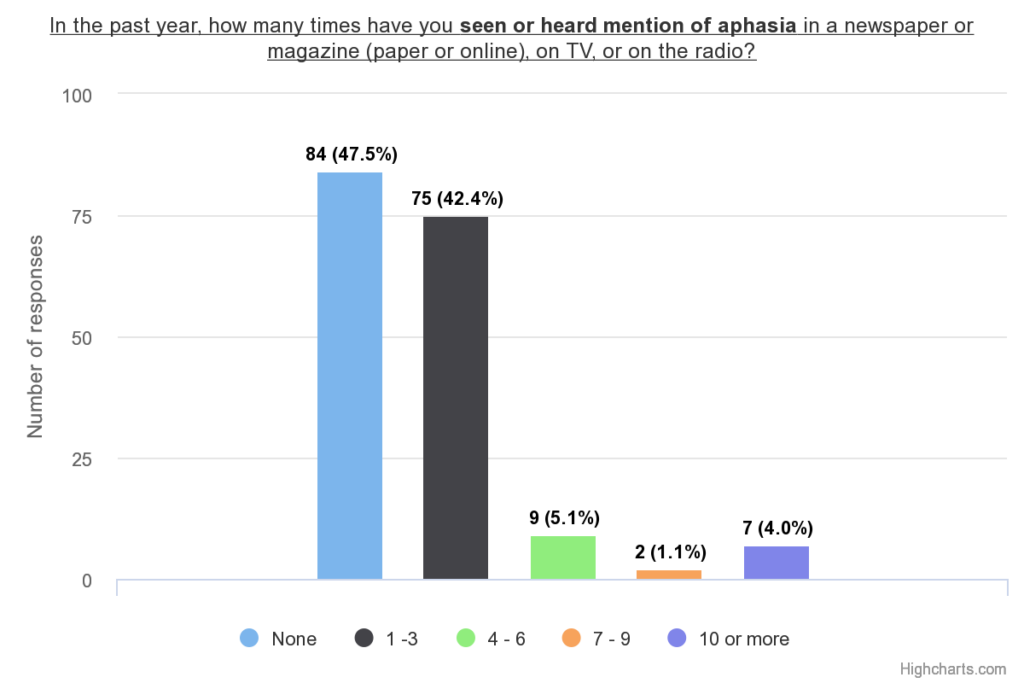 In the past year, 93 of the respondents who had heard the term aphasia recall seeing or hearing mention of aphasia in a newspaper, magazine(paper or online), on TV or on the radio at least once. That’s 52.5% of the 177 who had identified as having heard of aphasia.

This first reported aphasia awareness level of 8.8% is low. We hope that these results will help galvanize people to become aphasia awareness advocates and to reach out to their communities and networks to help spread the word and educate more people about this condition.

This survey was commissioned and designed by the NAA and conducted by Survata, an independent research firm in San Francisco. Survata surveyed 1142 online respondents between October 18, 2016 and October 19, 2016. More information on Survata’s methodology can be found at survata.com/methodology.

The data from this survey is meant to be representative of the U.S. population ages 25 and over with a 3.1% margin of error.

Below are links to download the survey report and raw data from the National Aphasia Association.